The Stranger Things Pro Pinball Machine by STERN Pinball comes with free delivery, 2 year warranty and we have the lowest price for the Official UK version. You can secure your machine which is due to arrive in early in 2020, on a first-come-first-served basis.

Can you solve the mysteries of the upside-down world of Hawkins Indiana? Find out in STERN Pinball’s release of Stranger Things!

Bursting onto the Netflix streaming service in 2016, Stranger Things shook up the sci-fi and horror genres, quickly becoming one of the most acclaimed pieces of TV entertainment of all time. STERN Pinball has taken the talent of legendary pinball designer Brian Eddy to bring the peculiar, upside-down world of Hawkins Indiana to pinball playfields all over the world, complete with encounters with strange phenomena and a one-on-one battle with the show’s dangerous Demogorgon. Brian Eddy’s designs are known to pinball fans across the world, being responsible for some of the most consistently high rated games of all time, including Medieval Madness, Attack from Mars and The Shadow. 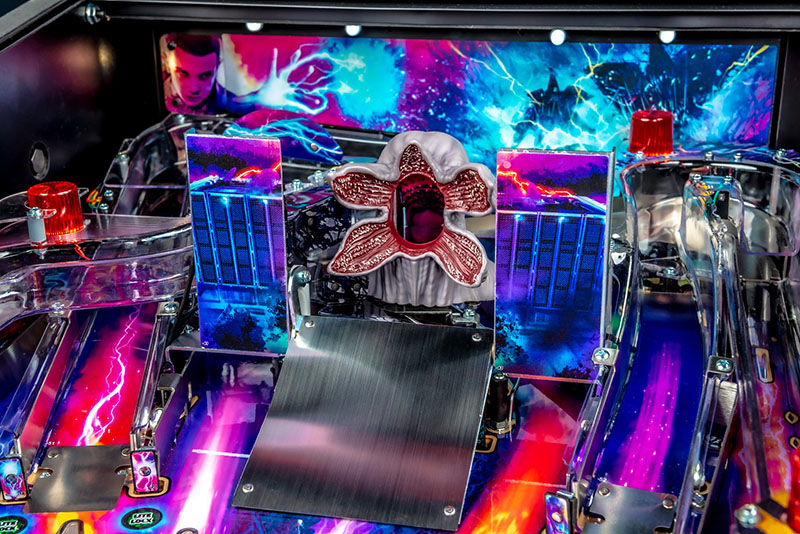 Netflix’s Stranger Things has been regarded as an immediate hit with critics and audiences alike with its intriguing enigmas of monsters, experiments and the supernatural. STERN Pinball’s Stranger Things is the perfect way to recapture of every strange encounter and atmosphere of the show.

Stern’s Stranger Things Pinball is available in three versions – The Pro Edition, the Premium Edition, the Limited Edition model. A sheet comparing the features of these three machines will be available in a sheet that can be viewed here:

For more details see our Showroom page. For directions see our How to Find Us page.
Stern Stranger Things Pro Measurements: